A few weeks ago, in Paris, I nearly got caught up with The Extinction Rebellion protestors getting teargassed right outside my doorstep. The country my family is from, Iraq, has been having protests have been going for months now with over 500 people killed. Lebanon’s Martyrs square, while full of protesters, has thankfully seen fewer killed. The Extinction Rebellion grows louder. It’s been about 10 years since the Occupy Wall Street movement and the Arab Spring. In 2003, I remember being 18 years old and speaking in front of 3,000 people against the Iraqi invasion. Growing up in a college town, protests and demonstrations were commonplace, yet I’m wary of jumping into the crowd these days, especially when the crowd is angry.

Each of these movements has so much history and potential positive action, yet somehow I find myself unable to understand my responsibility towards them. Make your voice heard is the idea. As Desmond Tutu once said, “If you are neutral in situations of injustice, you have chosen the side of the oppressor.”

“We must always take sides. Neutrality helps the oppressor, never the victim. Silence encourages the tormentor, never the tormented. The opposite of love is not hate, it’s indifference.”
— Elie Wiesel

There’s a word I’ve been struggling to identify. It describes a situation where the more effort you put into something, the more tangled up you become in it. That somehow, when you’re caught in barbed wire, it’s best to stop moving, rather than struggle further and deepen the burrs. Perhaps this is the excuse I give myself to not act, not support, not back, not chant, not take to the streets. This fog has only grown thicker as the protests movements have moved closer and closer to home.

In response, I’ve recently become obsessed with learning about Gandhi. I’ve known he was an inspiration to Martin Luther King Junior and Mandela, who both led movements shifted the path of history towards one of greater justice. Yet, I never depend on my relationship with his thinking first hand. It surprised me to see how he was initially so keen on serving the British empire, how duty-bound he felt to support them in their time of need. How strict he was with himself to do what he believed was true.

The movie Gandhi which came out in 1982, paints him in a picture where he seemed to act for goodness or to support India’s liberation movement. What inspires me is that he saw his entire endeavor as seeking the truth. It’s still resolving for me, yet I’m beginning to understand the threads he makes between truth-seeking, seeing the other as the self, and nonviolent noncooperation.

Gandhi’s first experiments in communal living started after reading Unto This Last by Ruskin. which is essentially an economic and political argument the crux of which is equal pay for all work and free schooling for all people. It led him to make some conclusions about self-sufficiency and to start building what later became known as his first ashram in South Africa. I’m finding that proto villages, eco makerspaces, earth ships, hacker farms, rural co-living spaces, spiritual permaculture hubs and other similar type spaces have been inspiring me more in these last years. Although considering them as a social alternative seems to lead to a strange future where educated, upper-middle-class and tech-savvy people flee cities to take the place of the rural people who just left the farms for a better 20th-century life. The continuation of that trend seems to pave the way to a dystopian survivalist version of the future with micro governments (mobs?) rule principalities.

Gandhi was nationalistic, and he believed in an India ruled by its population. The injustice of the British empire was apparent to him. What are the fundamental injustices behind so many of our modern-day protest movements? Growing financial inequality, corruption — which to me can be seen as related to inequality in that it’s a sort of jealousy described as a call towards fairness and potential ecological collapse. To my mind, these are caught in a quagmire. It’s a bit like an escalating feud. Power leads to economic and political gain at the expense of people and environment. Then in the process of removing the offensive force, people desire the same power and economic gains at the expense – yet again – of the natural world and quite possibly abusing another class of people.

Seek not greater wealth, but simpler pleasure; not higher fortune, but deeper felicity.

Gandhi had an interesting idea about the ethic of non-stealing. His perspective is that if you took any more than you needed for essential survival, you’re taking from someone else’s survival and hence qualified as theft and thus ate and owned very little. This sort of subsistence living may not be aspirational for many, and it may not need to be. There are smart people making arguments of abundance and wealth, for instance:

“Wealth isn’t about taking something from somebody else—it’s about creating abundance for the world.”
-Naval Ravikant 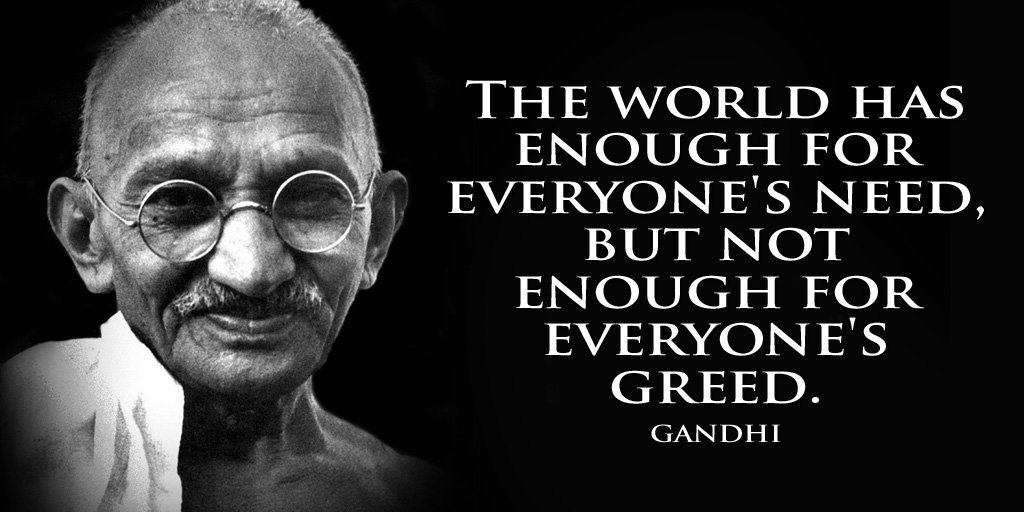 “The world has enough for everyone’s needs, but not everyone’s greed,”

In different times of my life, I have dreamt of different dreams. One is of exploring the origins of reality and galaxies with a Dyson Sphere powering our class II civilization. The other is one where I realize how little I truly need to be happy, and enjoy life building paper microscopes with my hypothetical children.

I am full of questions and doubts about what a beautiful way to live is, and I am open to living those questions as honestly as I can. What I loved about learning about Gandhi’s life is how commitments he made were like steps on a ladder. That a vow was solemn and that once he made it, you could trust it as much as you could trust a sturdy ladder leaning on a cliff face. That Gandhi’s exploration of metaphysical truth led to an in-world reality that others could rely on him for as much as they could rely on gravity.

Gandhi’s belief in Ahimsa – non-violence to any living thing – led him to a practice of humbling one’s self. It’s in this way he saw himself in all others.
Ahimsa is related to how Gandhi practiced non-violent non-cooperation, otherwise known as Satyagraha which is comprised of these principles:

To wrap up. Our systems are broken for the people and the planet. Protests movements are sprouting up requesting change at many levels and in many countries (I include the rise of the right wing and fascist political developments as a form of protest, asking to be heard). Questions about minimalism retreating and/or the possibility of abundance value creation for ever more people pop up. These ideas in turn disturb the desire for abnegation – although there may be a path related to value creation as a humble act of service and not an ego driven vehicle and/or expression of self into world.

Here are some thoughts on protests and the future of some aspects of economics and politics. I would love to hear reflections.

Continuing my hunt for my adventures in truth, I’m staying on the Gandhi reading list, next onto Tolstoy!

Sitting in my car a few days ago I had the strangest experience watching my brain attempt to deconstruct the way it parses it’s environment. I was attempting to listen to words for the sounds they were creating devoid of language and I absolutely could not. Unless I took a single sentence and turned off the radio I couldn’t just let the words wash over me without what felt like setting down roots that would drag as I pulled.

Try it, next time you’re listening to the radio, or your mother lecture you, try to hear her words for the sounds she’s making. I believe removing the human element from this essential interaction truely lays bare the awesome power of language. Vibrating air as telepathy.

It was such a treat to meet up with some old San Francisco friends today Mitch and Luigi.

We were able to talk a bit about the concept of a Hatchery (the name may be over used, but it’s so apt). And how it may help fund peoples ideas, I’m thinking some services that we can offer and some profit sharing models to encourage collaboration, and to stimulate work. I’m still mulling all these thoughts over and if you’d like to discuss what a hatchery can be, a hackerspace -geekery and +focus on entrepreneurship as a goal. But if you want to talk about this, projects in general, and DIY/Maker/Hacker culture you should come to the Ann Arbor Chocolate Cafe in Ann Arbor this friday!

At Modati Clothing we’ve been experimenting with new inks and techniques including:

All these inks combined with fresh talent Ala Sadie Scheffer and what do you have? A whole new series of shirts rolling out, you can check out our new website at Modati.com. I’m really excited about the interactivity of our new inventory. Products like the thermochromatic potholders that change to indicate their states (they catch fire when they get hot) and the mood shirt, which appears to change moods depending on if it’s bright and sunny out, or dark and scary.

It’s interesting to see how important design is to us, if you consider the fact that you are simply an aggregate of sensory inputs through time, every object you encounter becomes a part of you. So let’s keep making beautiful things, so like the girl, we can keep a bright sky above and smiles on our faces.

What? So soon? We’re nearing the double digits for the 21st century. I’m nearing my own quarter of a century, I feel like I squandered it. I missed dozens of opportunities to attain mastery at different topics. But is mastery all that great? I’d like to know what you think is important? Because I can’t isolate it, every time I think I have the earth quakes beneith my feet and I wind up in another country of thought. So the closest thing to science in this regard is to take a poll, pshh psychology… Anyhow, what do you think is important?